The inspiration to write is a curious thing. At times, my mind teems with ideas and I wake up with a complete piece in my mind, at others there is an utter block and I fear that my creative spring has dried up. Fortunately, this never happens in the long term. But at such times, the inspiration to write may come from an image.

For anyone who wants to write, look at an image and allow your mind free rein to produce words to describe it. Even if you think you can’t write, at worst you will produce a list, and at best something lyrical.

The image above is a Cornish dry stone wall, or Cornish hedge as it is locally known. I took the picture when I was visiting my family in Perranporth earlier this year; the wall is just a few minutes’ walk from Stella and Pete’s house, up on the coast path above the bay. 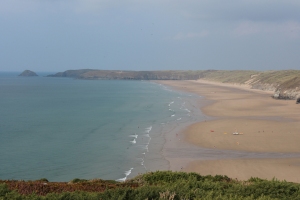 When I consider the image now, I see the large rainbow hued rock just left of centre as the heart of the picture. The irregular stones around it, which slot together in a form that holds and connects, could represent the rocky road of grief and loss. I wonder which stone started the wall. Was it the very bottom one? Logic says a wall can only be built upwards. So we grieve – onwards and upwards, creating a solid foundation before we can move to the next level.

The bottom layer of stones is standing end-on. They need to support what comes above so must be strong and straight. Thus it is with the strength we have to find to move forward and build up our lives again after the trauma of loss.

The next layer is smoother and looks rather more balanced, although there is a gap at the right hand end which gives the effect of two steps forward, one step back. Above the gap are two stones leaning in to each other; these look to me like angel wings, protecting what lies below.

The third level up is definitely the heart of the wall. It could not exist without the base foundation and it is large and smooth and even. My eye is constantly drawn back to the wonderful rainbow hued heart stone. I love the little tangle of lichen which caresses its base. Somehow a small interruption to its perfection seems quite appropriate.,

The fourth layer sits confident, smooth and stable atop the rest. It puts me in mind of the level of acceptance of loss that is only arrived at after a considerable passage of time. The layer is even and without any jagged edges. There is a small stone that sits quite differently to all the rest, tucked in just on top of the heart stone, which perhaps represents something new to be cherished. The shapes, textures and colours of the rocks in this row are amazingly varied. They suggest the return of an appreciation of the beauty that is all around us.

The fifth row echoes the second row in its neat, level formation, and I imagine this row lends strength to the wall’s structure. It says little to me other than ‘I am here and I am strong. I stand upon a foundation that will not crumble.’

The final layer looks almost casual in its construction. It sits loosely atop the rest but in itself it provides a base for the sturdy, wind resistant plants that cling tenaciously to it. I love that in moorland plants. No one puts them there, they simply arrive on the wind, on the sea air, through the birds that fly above. They ask nothing; they clothe the rocks with colour and softness. They look soft, yes, but they are hard and tough, much like the indomitable human spirit.

Keats wrote odes to nightingales and Grecian urns but I don’t think he ever wrote one to rocks – perhaps he should have done. Why should we not be stirred by what we see as inanimate objects when put together in a form such as this, taking on a life and beauty all their own?

Next time you look at such a wall – really observe it, and see if it speaks to you as this one speaks to me. Who knew a Cornish hedge has a voice?