Close Encounters of the Connected Kind

Many will remember the 1977 science fiction film, Close Encounters of the Third Kind, written and directed by Steven Spielberg.  It tells the story of an ordinary man whose life changes in extraordinary ways after an encounter with an unidentified flying object.

Every parent who loses a child is catapulted from a hitherto ordinary to an extraordinary world – in the true sense of the word, and trying to acclimatise to the unwanted, unfamiliar planet of grief is a massive challenge.

Eleven years after losing James, my grief planet has become more like home.  I have learned to negotiate the terrain that at first looked like an alien, un-mapped space.  My grief Satnav has charted the blind alleys, the no through roads, the cul de sacs and finally the multi-lane highways with the occasional diversion that reflects a slipping back into distress; triggered by differing outside forces.

The storms that once blocked the routes have given way to sunshine, clouds, light breezes with the occasional shower, and many rainbows.

In Close Encounters, Richard Dreyfuss’s character feels a connection he cannot sever with the UFO. The subliminal images that plague him throughout the film remind me of how, in the early days of loss, memories play repeatedly across the mind’s eye like inescapable screensavers on an endless loop.  You can neither turn off your memories nor eliminate your shock at the fact that this person whom you love so much is no longer physically here, and what you have left is a flat line, static level of memories, like an album of images to which you cannot add.

Accepting that your life cannot have a neatly tied up ending like a fictional story or screenplay is tough.

For me, time has unfolded the gift that loss has gradually offered: it has led to numerous new connections which in turn form fresh memories that include James, albeit in a more ethereal sense.

I was recently asked to speak at a public event at the RNLI College, the organisation’s headquarters in Poole, Dorset. The event was a fish-themed fundraising evening hosted by the RNLI to launch the charity’s annual Fish Supper Campaign. 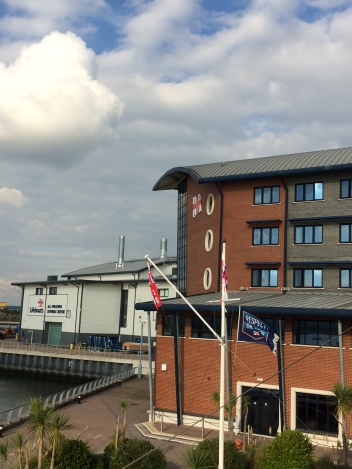 My talks and presentations thus far have been based largely on living with bereavement and loss.  They have been tailored to groups who are either grieving or connected with the grieving.  This time, I was asked to engage with an audience of around 80 people, at a reasonably light-hearted social event.  Those attending were connected with the RNLI and also included members of the public who had purchased tickets for the advertised event.

I thought about the brief; it presented something of a challenge to ensure that I did not bring down the tone of what should be an enjoyable, relaxed evening.

I needed to tell James’s story in a way that would ultimately provide positive messages.

I decided to base my presentation around the theme of connections.  As readers of my blog know, my new connections started very soon after James died in 2005, through our work with Kingston council to institute safety measures at the riverside.  Our ultimately successful three year campaign was a gratifying legacy for James in its own right.  Through connections that I made over that time and beyond, I talked at CRUSE bereavement training days and co-presented workshops at the Harry Edwards Healing Sanctuary with Linda Sewell, with whom I first connected through the bereavement organisation The Compassionate Friends. Connections with the US Based Drowning Support Network also led to more writing and friendships made across the water – and across the ether.

But it was not until 2014, with the publication of Into the Mourning Light, that my connection with the RNLI began, through the initial contact from Teddington helmsman Andy Butterfield, who read locally about my book.

He in turn connected me with RNLI Staff Guy Addington and Ross Macleod. I told James’s story for the Respect the Water campaign in 2014 and was heavily involved in the campaign that year, amongst other things in composing the text for the beer glasses supplied in local pubs and restaurants.

In 2015, I was invited by the RNLI to tell James’s story again and the copy was used as a case study in the initial strategy document for the newly formed National Water Safety Forum.  Attendance at the NWSF launch event in early 2016 led to even more new connections with Jackie Roberts (RLSS) and Dawn Whittaker (East Sussex Fire and Rescue) … of which more another time.

Thus I found I had no shortage of material and I structured my presentation around the connections I’ve made and the positive aspects of life after loss.  I illustrated the talk with slides which chronicled the key events.

At the event, the MC introduced me as an ‘Ambassador for the Respect the Water campaign’, an accolade which makes my heart swell with pride – naturally, on my son’s behalf.

When I choose to give voice to and share what has come from living with loss, it is always done from the heart and in loving memory of James.

I chose not to dwell on grief and loss per se, except for two key points which I hoped the audience would take home with them.

Firstly I asked that people do not turn away from the grieving because they ‘don’t know what to say’.  How much better it is … to say a few carefully chosen words than cross to the other side of the street in avoidance.

And I made the point that offering help should be tangible, rather than an open “let me know if there is anything I can do” which puts someone on the spot.  The newly bereaved are not good decision makers; it is as much as they can do to put one foot in front of the other.

Secondly, although it is your natural inclination to try, you should resist the urge to empathise.  It’s no use telling me that you understand how I feel because your pet was put down last week (yes that really did happen to me).  Better to say nothing at all!

I concluded my talk with a quote from Jimmy Carter, former President of the USA.  He was talking of his faith, but I paraphrased what he says and applied it to each and every person associated with the RNLI.  It also reflects my own mind set in dealing with grief:

I do whatever I can,

for as long as I can,

with whatever I have,

…  to try to make a difference.

Afterwards, two members of the audience came to me and thanked me personally for my words, telling me that something I said had struck a chord.  It is impossible to convey the wonderful feeling this gives me; being public in grief brings with it a vulnerability and the potential of being judged by my actions.  I am lucky that I meet largely with positive responses.

The fact is that the RNLI organisation recognises and understands connections.  Who better than the volunteers like Beth Wilkinson, who was also a guest speaker at the event, to know that life can indeed be lost in an instant? Beth spoke lightly of a day of missing her bacon sandwich because her pager kept going off, but she represents the sharp end of what this life-saving organisation actually do on a day to day basis.

None of us can never forget that tragic accidental loss of life impacts on and reverberates through many lives, whenever, however and wherever it happens.

Whatever I can do to help lessen these effects reflects my heartfelt desire to stress the importance of understanding how careful we must all be around water, however innocuous it may appear.

We must do this in order to prevent further traumatic loss to individuals, the emergency services, and ordinary families such as mine; who never wanted to be extraordinary.